Rich in oxygen and oxygen poor. 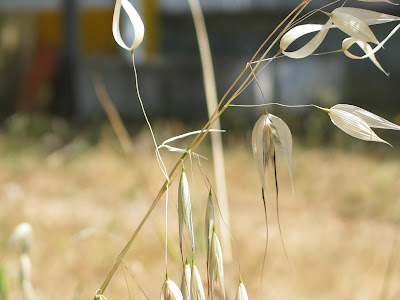 Think of a candle burning. You put a bell jar over it and the flame will go out from lack of oxygen. When you lift up the bell the flame will flare. The oxygen is aspirated into the bell jar. This happens fairly quickly. Then, when the heat can escape to the environment, fresh air will be sucked in regularly.
Nature wants that there will always be a balance in the composition of air. So a lack of oxygen draws fresh oxygen in order to reestablish balance. Every possible opening, what ever small will serve this purpose.

We make the dry hay wet, by immersing it. The counter pressure of the air is large. We keep it under water level with a heavy weight. The air in the hay has to come out.
Then we let it drip. The air in the pile of wet hay is made good either aspirated.
The bacteria in the grafting fluid are the starter of the heating, which will soon follow. The moisture and the oxygen are the circumstance in which it takes place. In addition, the outside temperature plays a role.
It is the psychrophilic bacteria, which begins heating. Later, after about 30ºC, the mesophilic and thermotrophic bacteria take over and after a 50ºC the thermophilic.

If now we would aerate the hay, by turning it (time after time), the thermophilic groups of bacteria will bring the process to excessive heat, about 80ºC. Also temperatures of about 95ºC are measured. This until the organic matter, for the most part, is volatilized in CO2. And most of the organic matter is reduced (burned up), so the temperature can drop.

We are striving to close the pile of from oxygen when the thermotrophic bacteria have done their job. This will succeed only partially. But we manage to create a low-oxygen environment in which the hay goes on digesting without 'burning up' in CO2. So, with a minimal amount of oxygen. A proper digestion of the hay is not dependent on excessive heat. It can do with lower temperatures.

This bacterial composting process we call a biochemical process. At lower temperatures it indicates also a partial chemical process (where there is no bacterium involved), in the sense of 'weathering'. Hay gets 'tired', due to all the influences it has to endure. And this is what we want to achieve. Hay must become 'tired' so that it disintegrates into small usable fragments, making it into compost. In our post Microbiology for Dummies we explain this further.

Meanwhile, for us it is proven that a complete oxygen-free environment (an-aerobic) can not be created, for the air in the hay will always attract oxygen, because of the balance that air wants to achieve. Each option, which it can get, though still so small, air will use.
Hay in a big bag is fully exposed to its environment. We wrap up the big bags very well and yet...
In the description of the method for the production of 'Noble Manure' (a description we followed through out the years) of the German agricultural engineer mr. H. Krantz (in 1939 by dr. Ir. F.C.Gerretsen), we read the opposite. Here is referred to an an-aerobic conservation of manure indeed, by tamping the dung pile. A dung pile which is inside wooden partitions in the open air. This in itself we see not as an accurate indication of what actually happens...