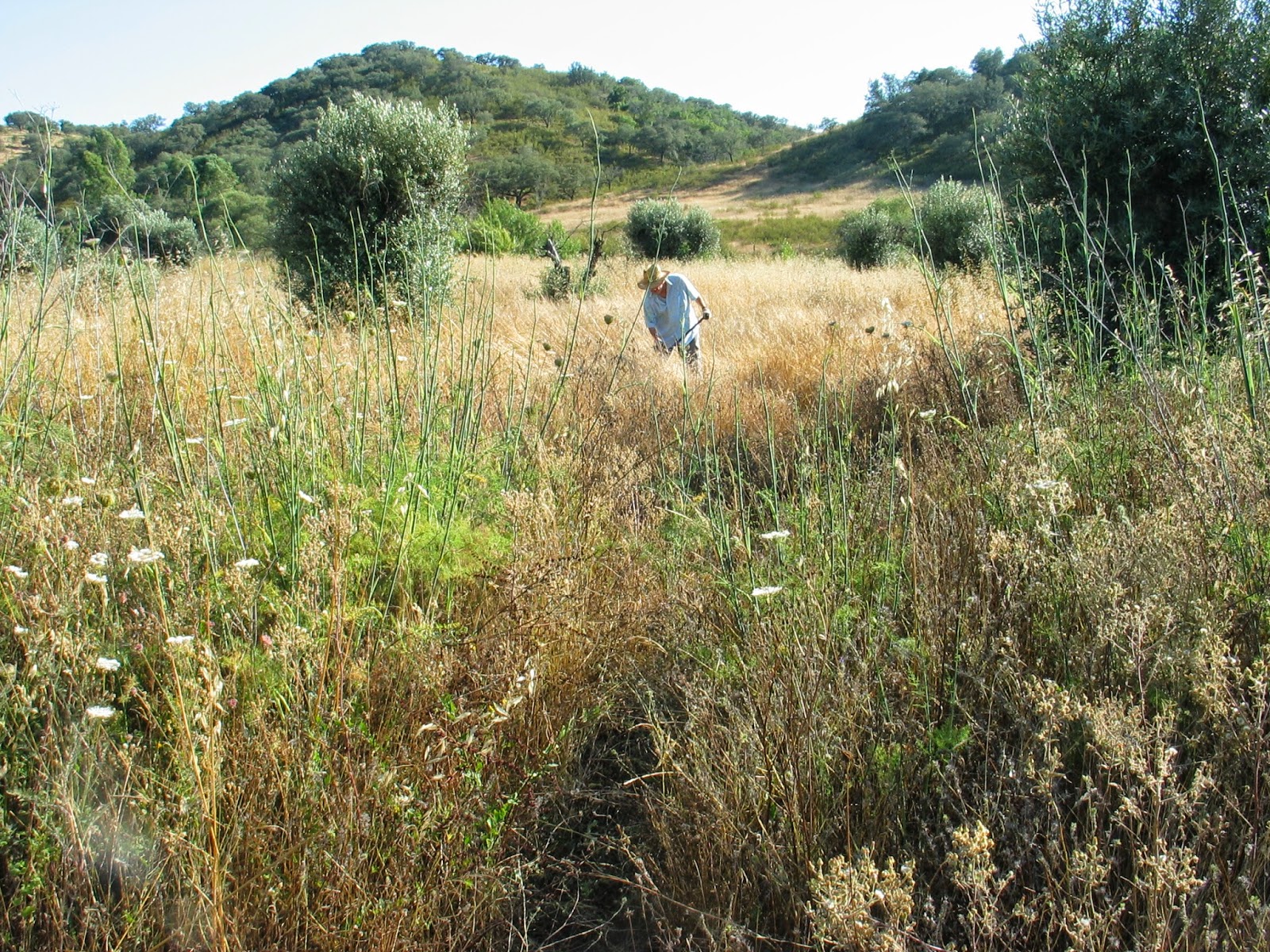 The grass is high this year. Much higher than we expected. 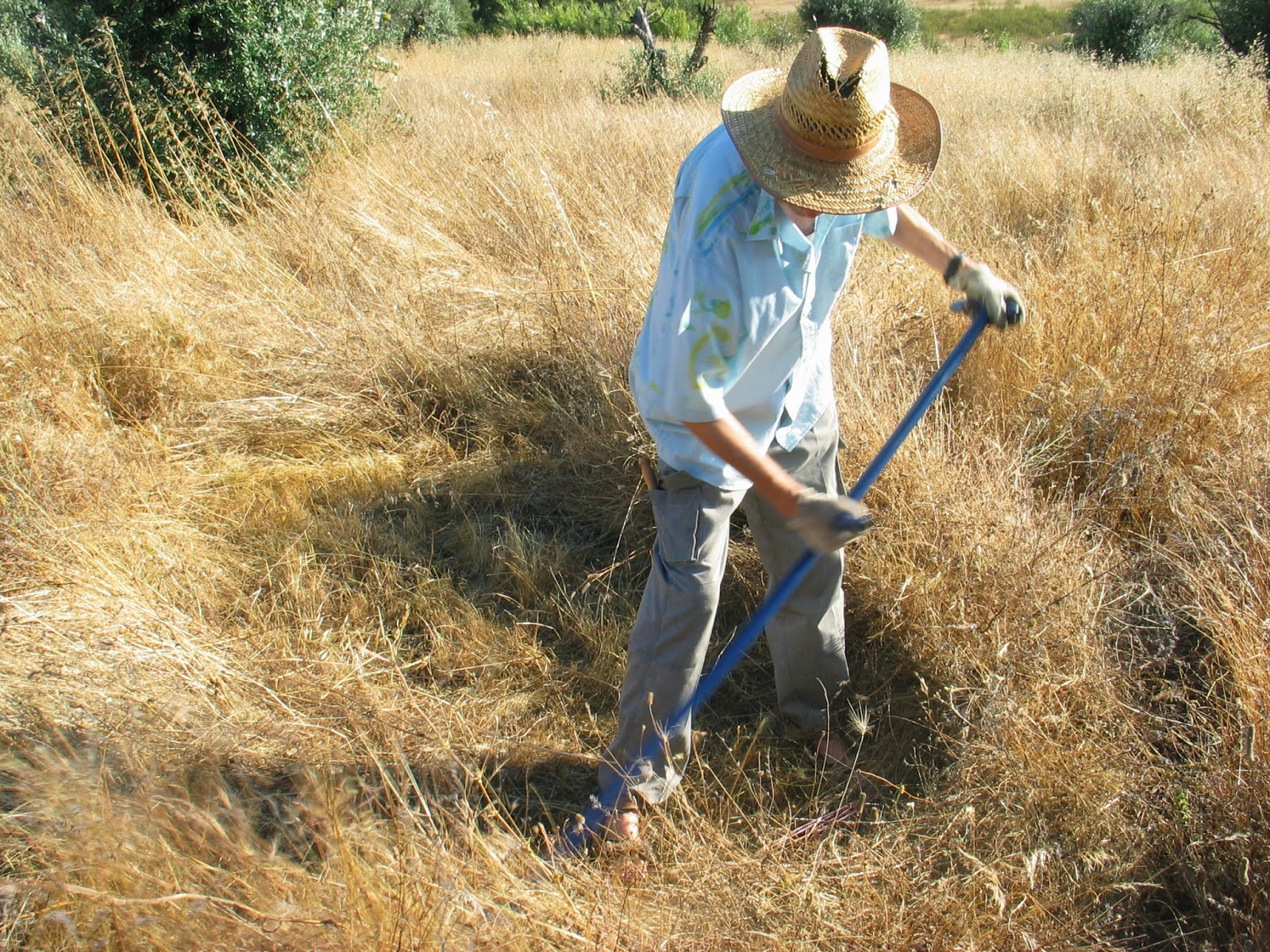 There is one kind, that certainly is growing into one meter fifty high. Sometimes higher. 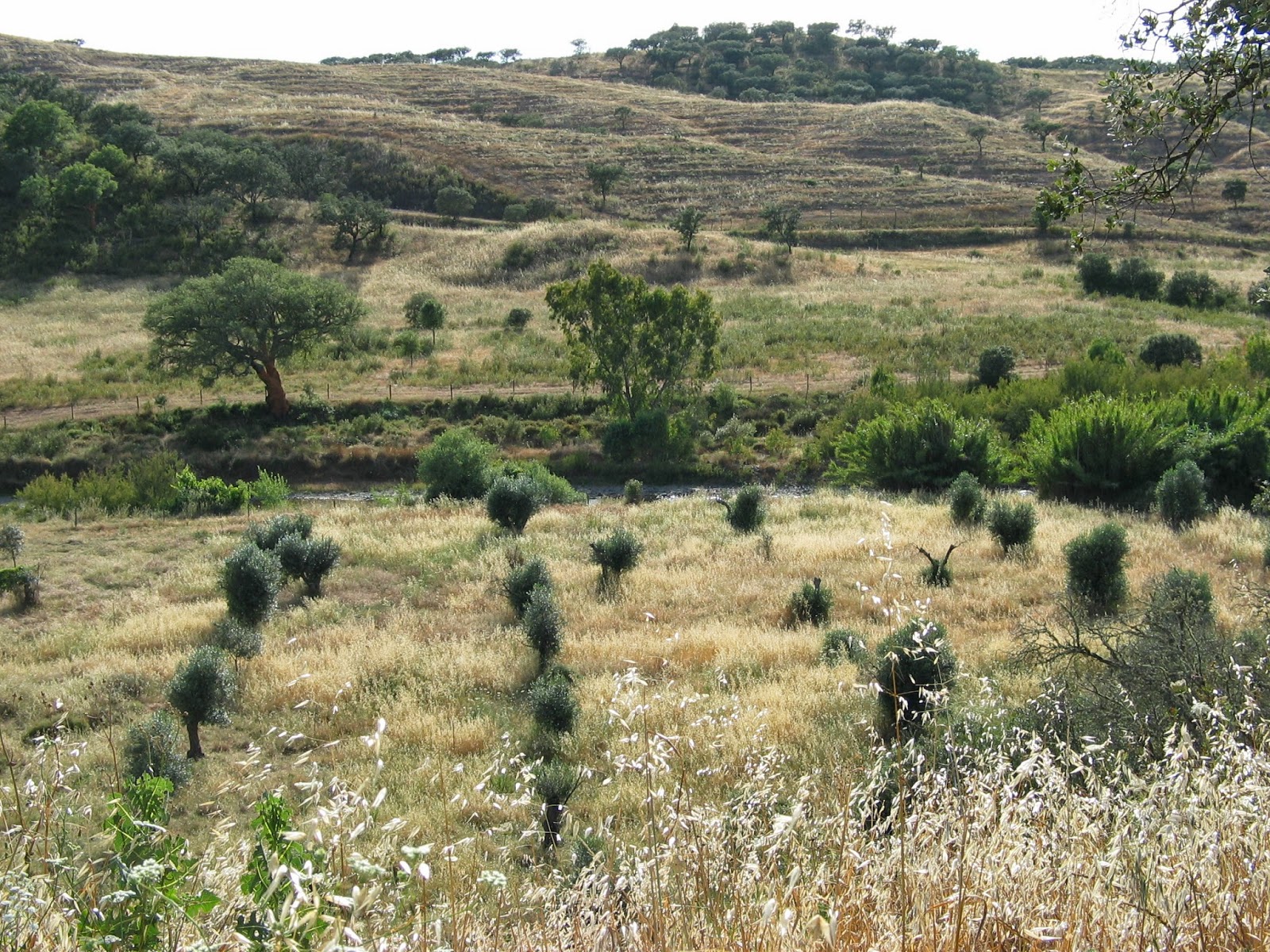 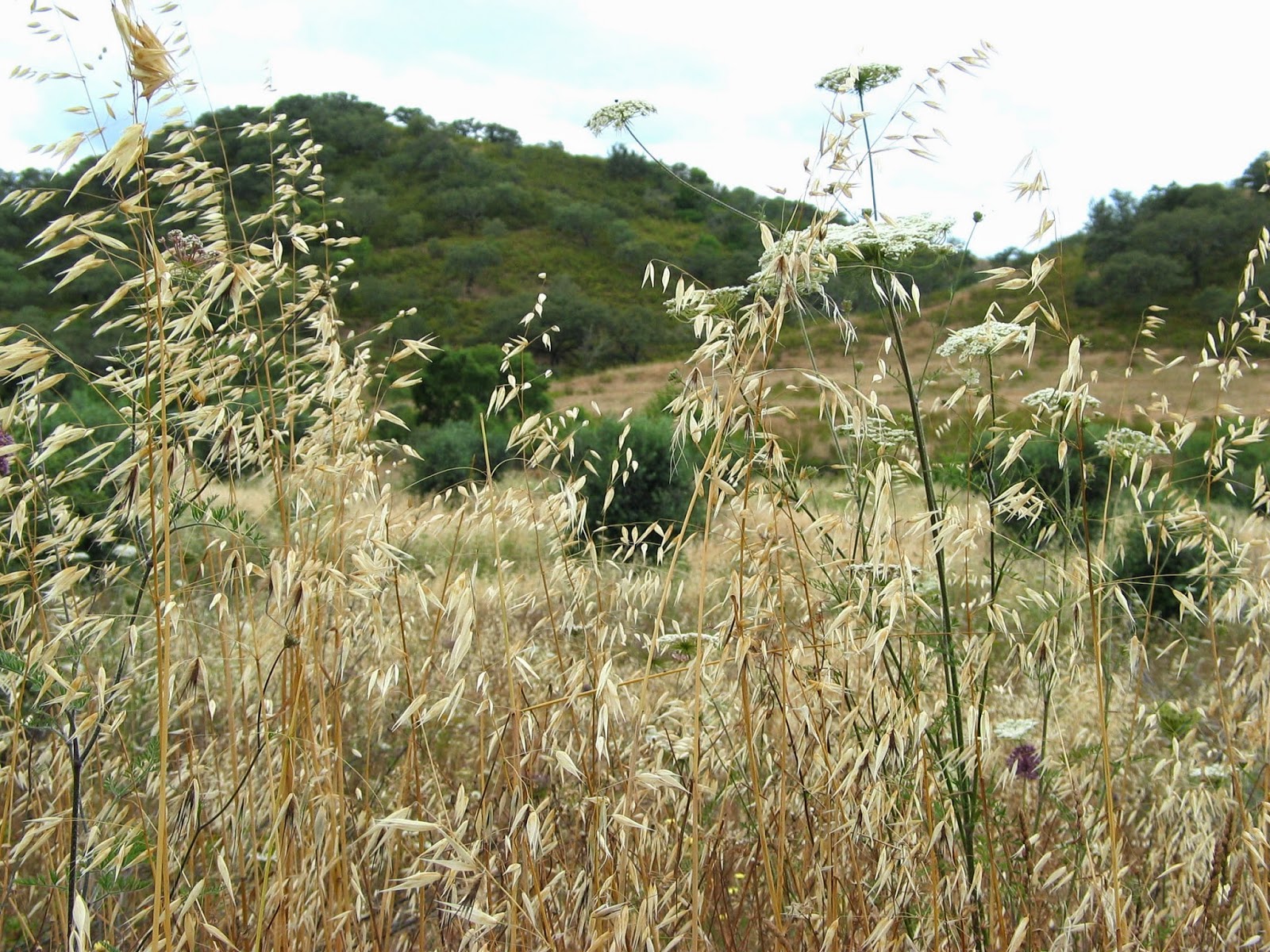 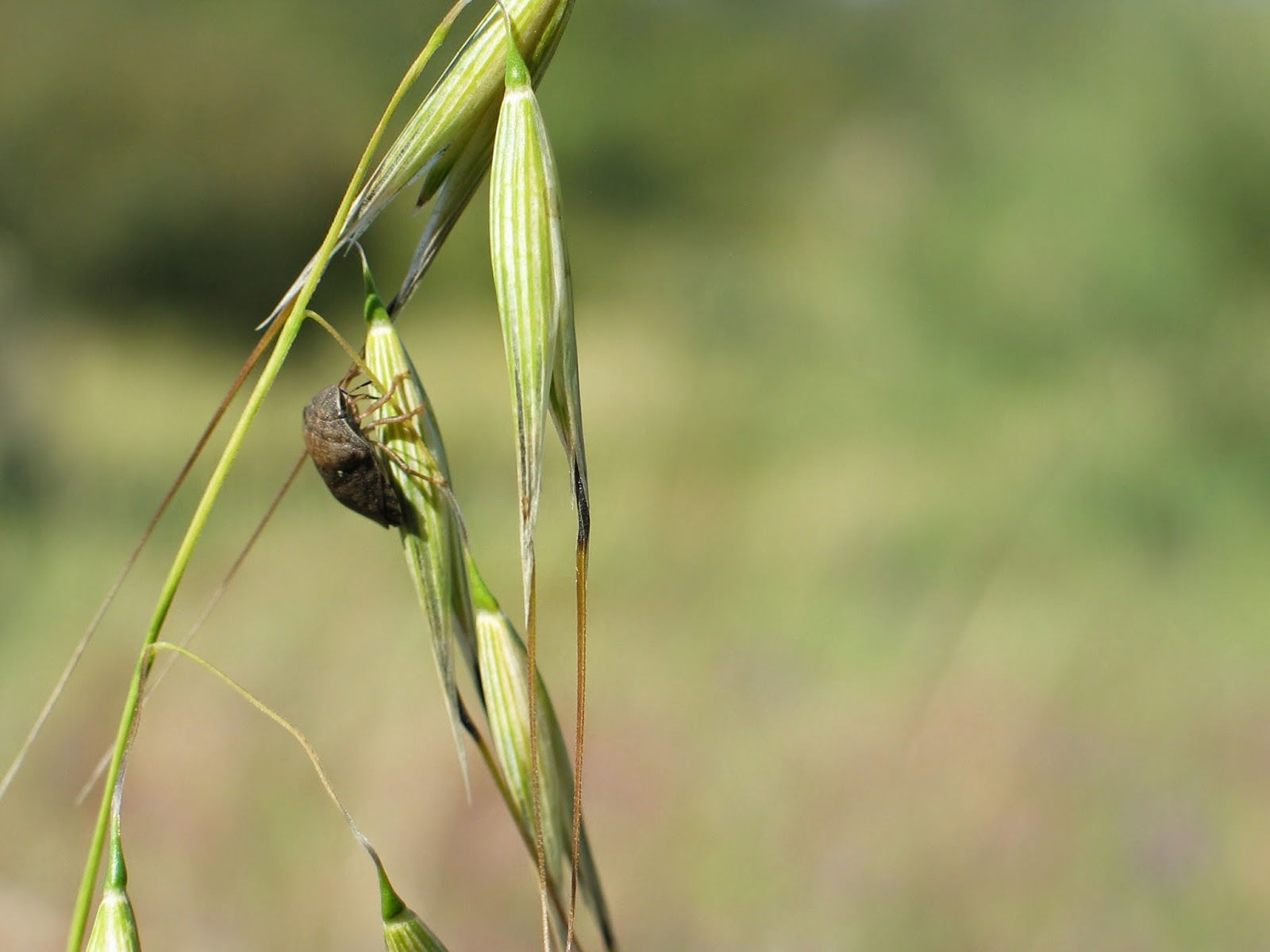 Those high plumes contain sharp seeds, which are very efficient equipped with wings and barbs. They stab in your socks and in the fur of the sheep. It is quite a chore to get them out of your socks before you discover how it works. They stab with a sharp point inward and can only go one way; go on instead of going back. By moving, you can also lose them again. And that is precisely the way sheep lose them. Sheep serve as a carriers of the seeds, which thus have a large distribution. 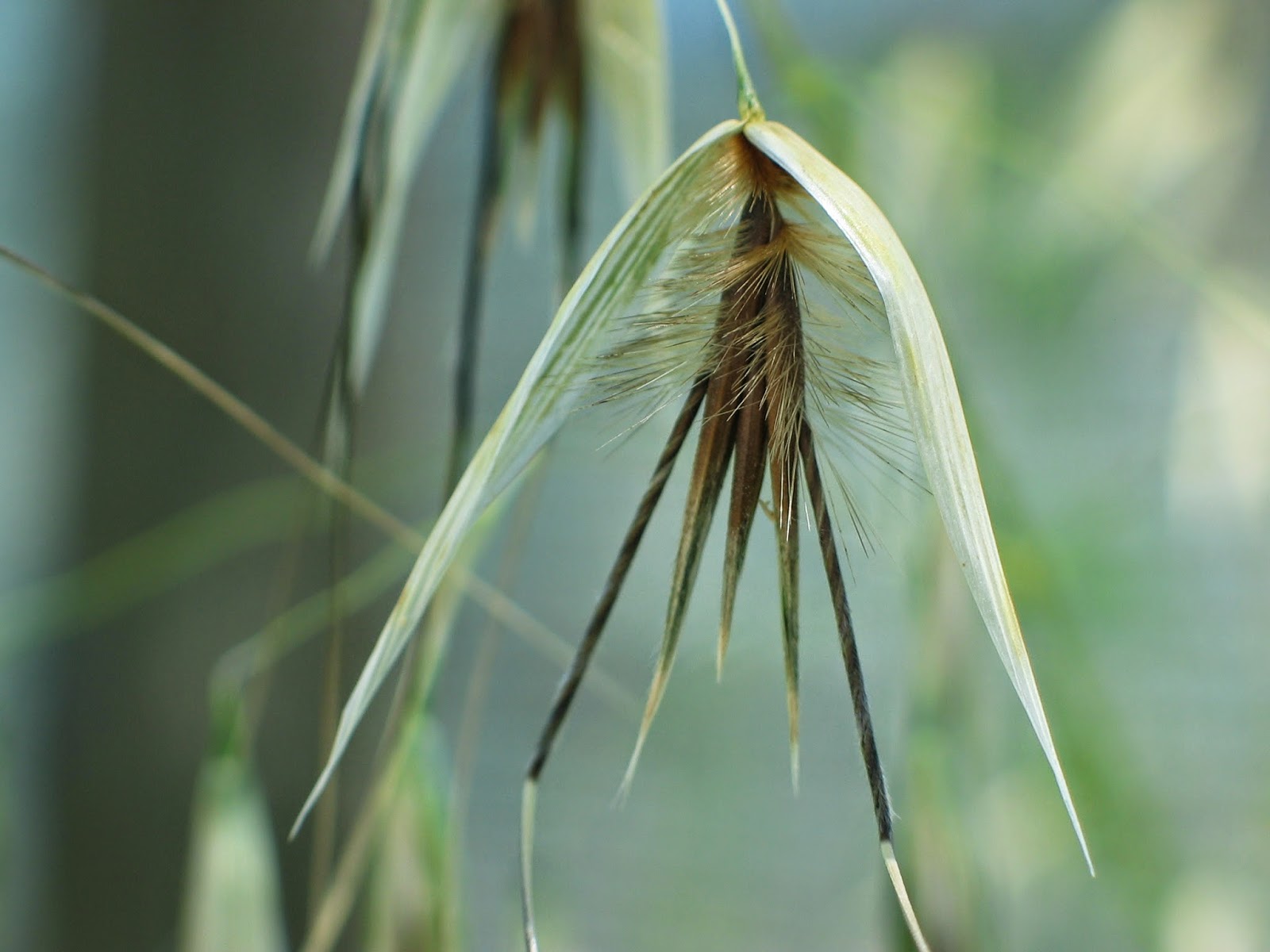 It is a hard type of grass and seems not to have such a good C/N number. On top of our Monte there is a lot of it. Hendrik already has been mowing some.
"It will take more manure to compost it properly." he says. "It occurred to me that this was the case, in the previous year." 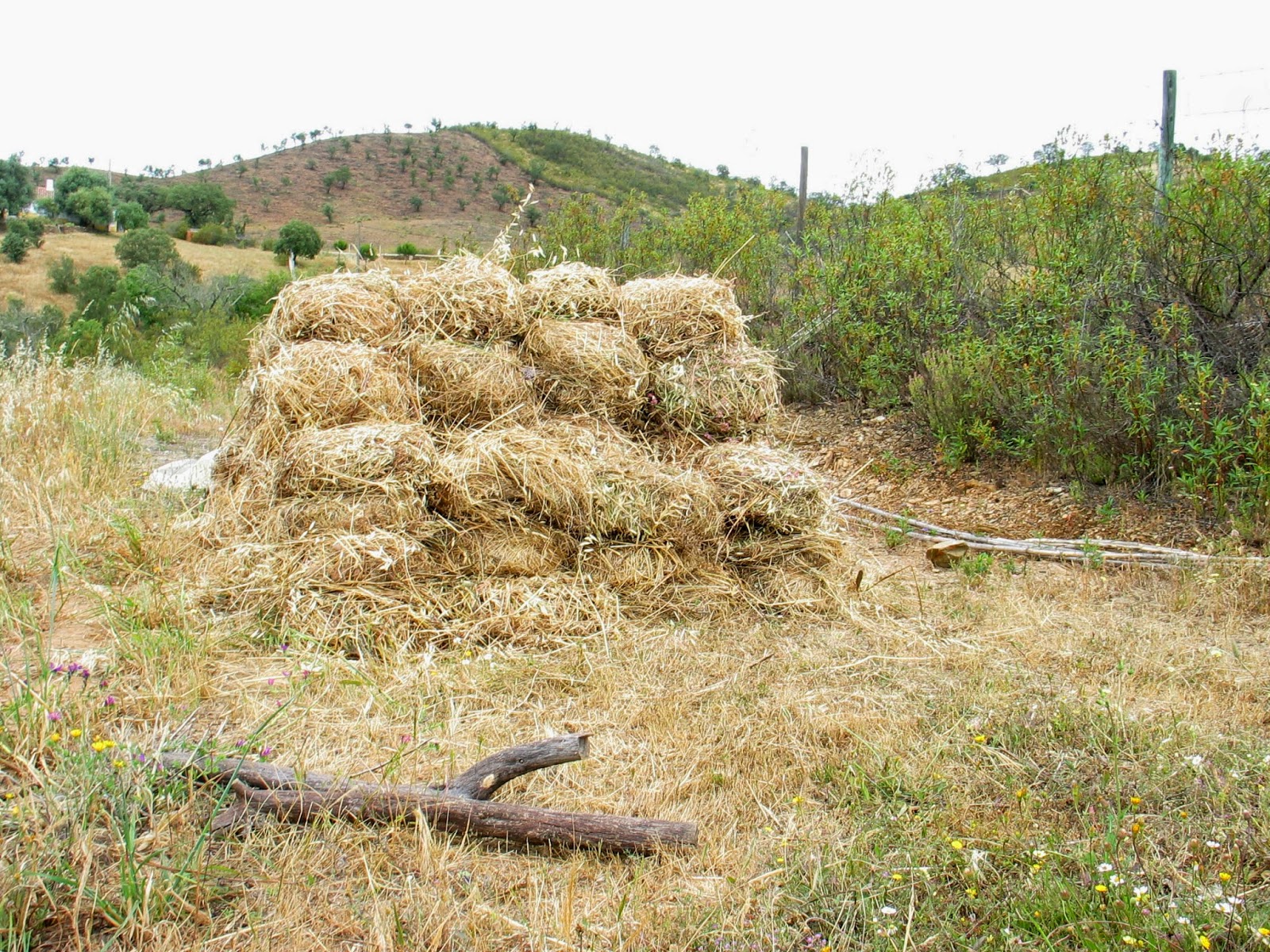 But there are plenty of other types of grasses also. This year they all grow close together. It looks very promising. 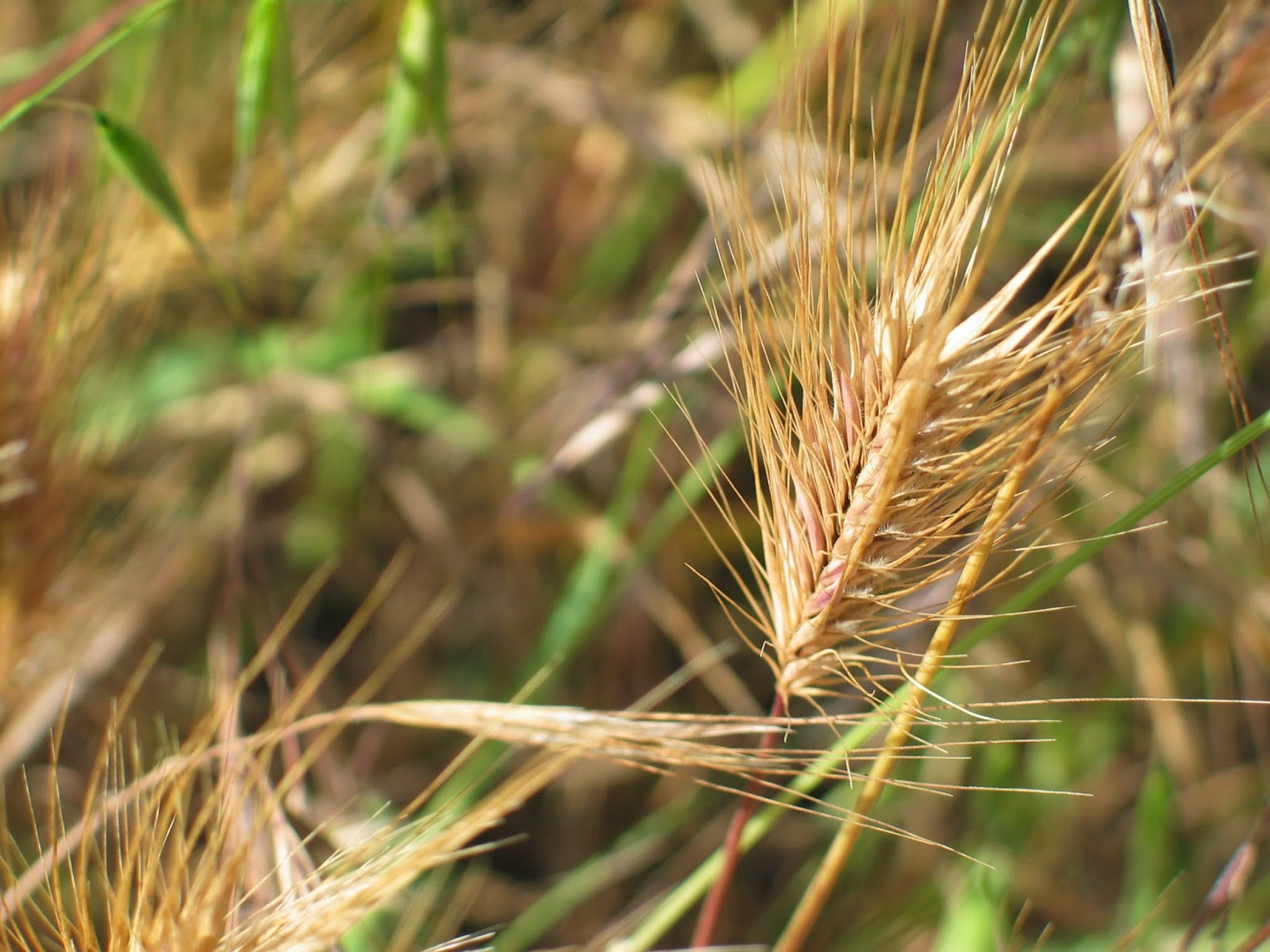 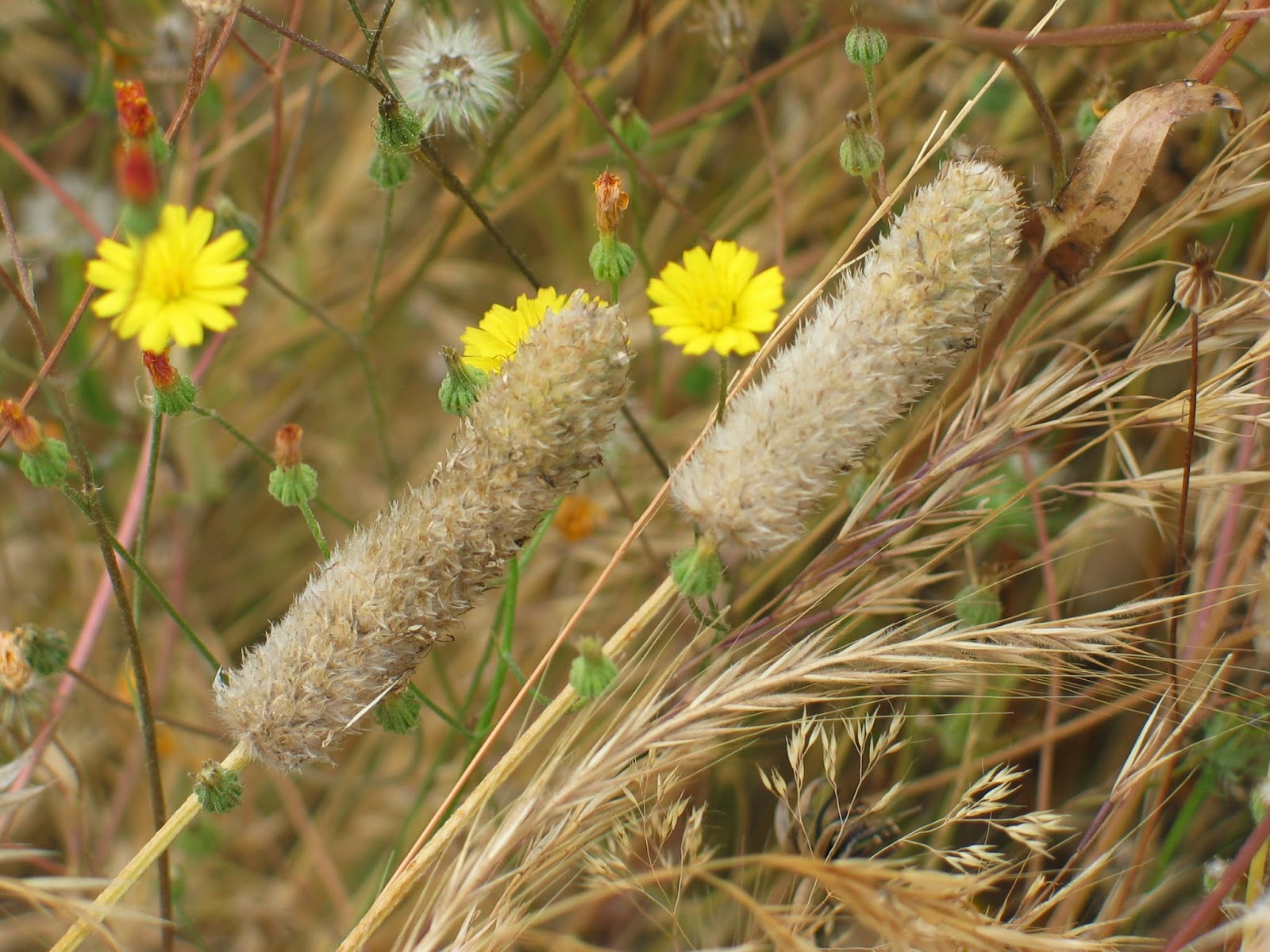 In between there are legumes. They grow low and provide mass and food to the crop. They are not as colorful and ceremoniously present as the other flowers, but they are very functional. You can expect legumes to provide sufficient nitrate, which makes a favorable C/N quotient, so you need relatively little manure for composting.

If we use less manure during the composting process, we can use our compost as a good potting soil for all kinds of plants. If we use more manure, the compost will be richer in nutrients, which makes a good potting soil improver.
This is a general rule that always needs correction. Because it is also true that with composting poor grasses we use more fertilizer. With rich grasses we use less. Experience teaches a lot. It teaches you what to do to get the result you want.

This land was full with flowers the previous year. Some of every kind. We think that there are little flowers this year, because last year Hendrik mowed early. So the flowers had no time to spread.

And there is more... Early in the previous year, the sheep were grazing this land, until the land saw bare. Than later, in April, when the grass and the flowers where high enough, Hendrik began to mow it. So the sheep had eaten the winter grass, causing some space for the flowers to germ in spring. This winter there where no sheep on this land and the grasses could develop fully. Therefore, perhaps, there are no flowers now and this is why the grasses grow so close.

Last spring we had not so much compost. We needed a lot more to set up the vegetable garden. In the course of the year Hendrik discovered that making hay made the composting much easier than to cut and process fresh grass.
"The next year I start mowing until the end of June." he said then. "I can make beautiful packets of the hay and the processing is much easier. That hay is wonderful stuff to compost."

And now we have a big stock of compost. We no longer have to worry about supplementing the required amount. Out of approximately 12 m3 of grass and hay Hendrik made about 4 m3 of compost. For this he did not use more than 120 liters of wet manure. 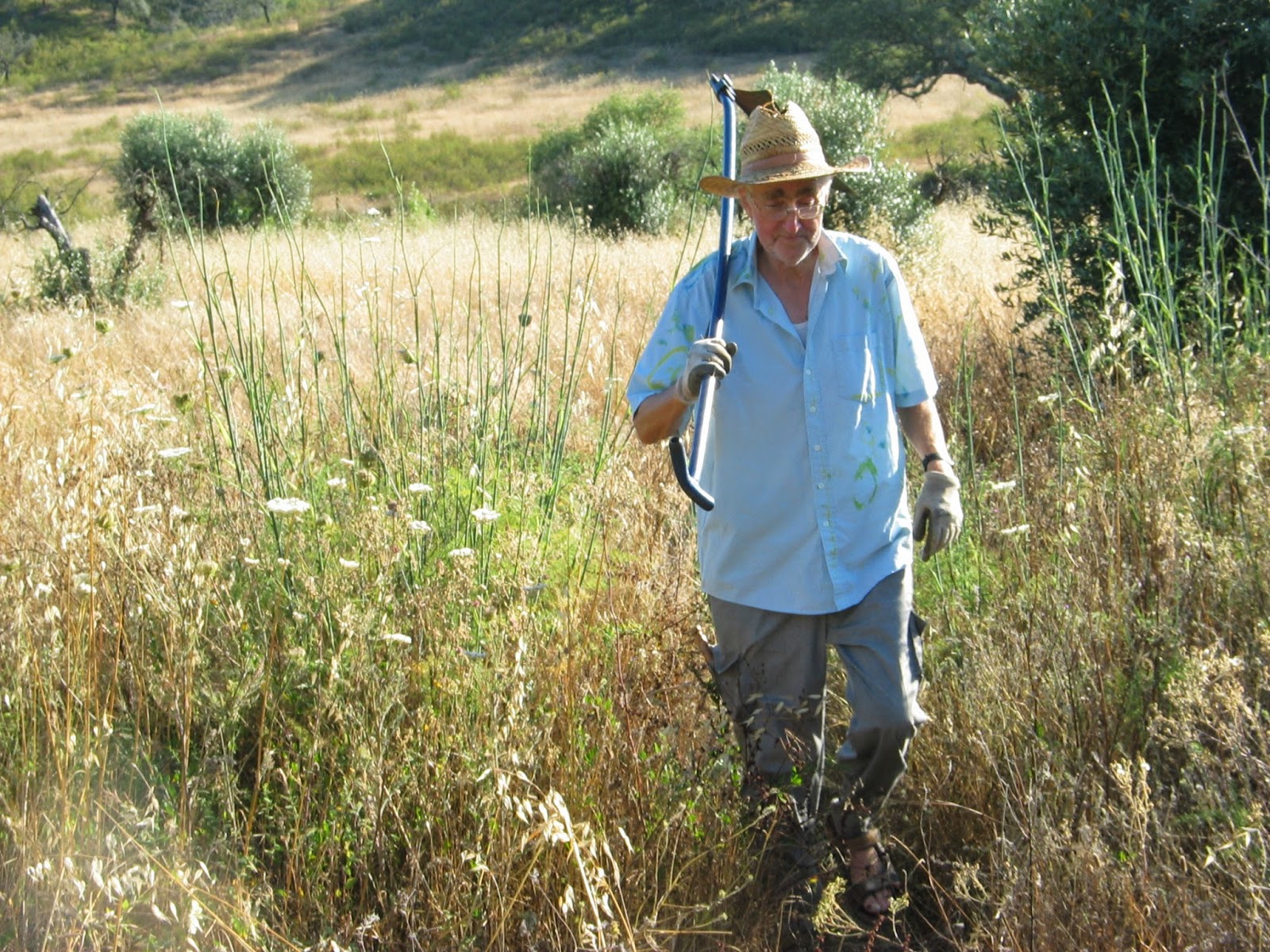 A whole new season lies ahead of us. Who knows what it will bring.