"You call this soil?"

Recently I spoke to a fellow gardener, right here in the neighborhood. We talked about the ground on which we had set up our garden, and where we grow our vegetables. He told me that he had taken a sample of his garden soil, in order to allow analysis, back in the UK. That analysis showed so little nutrients that the lab technician remarked: "You call this soil?"

I also spoke to someone, a Portuguese, who works in the forestry. I asked her what she thinks of this soil and how it was called. She told me that the hills consist mainly of shale rock. The top layer is the weathered portion thereof; a sharps slate. This also means that there are lots of stones to be found. The soil in the area around the river (our Rio Mira) has a finer structure, because it has been flooded many times and thus has a rather thick layer of fine silt and clay parts on top.
When I told her about the video of Dr. Elaine Ingham, in which she says that soil actually is mineral, she nodded. "Of course," she concluded. "Soil is mineral." It was the way she said it, that struck me especially. As if it were the most normal thing in the world... And perhaps it is.
But because of this, she did not conclude that the soil is fertile. Because after all, this was never apparent from the cultivation that is being done here. And so it happened to us also... 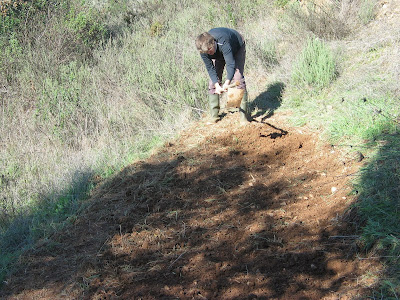 When in 2011, I started with the construction of a garden in the valley north of our house (see post 'An horta in the Alentejo') I found an almost lifeless soil with practically no worms, no soil life. The following year (already) this garden failed miserably... well, I brought air in the soil. So the weeds grew very wel. Even better than outside the garden.
My conclusion was: "This soil is no good... you cannot do anything with it."
How wrong can one be?
And how can you know... how wrong you are?

If you assume that the soil is not fertile, the first thing you think about is to add fertilizer. The best kind of fertilizer which we have access to is grass compost. Knowing that compost itself is not a fertilizer: 'But still, when you add compost to the soil, your vegetables will grow better. So it behaves like a fertilizer. And this is better than nothing... So it maybe is a some fertilizer after all...?' 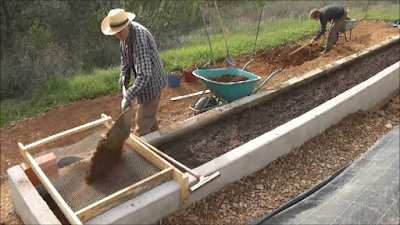 Now, as I finally have understood (see our post: 'Amazing harvest already -2016') that the soil around our house is good... indeed is fruitful... I also better understand how compost is doing its job. Compost activates the microbial life in the soil. It is not fertilizing it. It opens it up, it unlocks the nutrients from the soil. Therein, in the soil you find the food, not in the compost. But of course now my suggestion is to definitely...? Because compost also contains nutrients...? But this is not the basic construction of what is actually happening...
The soil (our shale rock) is potentially fertile and the compost makes it active!

But how can the soil be fruitful if the nutrients cannot be measured? How a technician can say, "You call this soil?" Is the man blind?
Elaine Ingham gives a simple conclusion: "The minerals of which the soil exists, are not all free flowing, they are fixed and laid down in the soil. And a mineral that is not free-flowing will not be measured."
Which in itself is a revolutionary statement because it goes against all forms of manure and fertilizer trades. With this we can leave rested all this nonsense of transporting phosphate and dragging what-ever-fertilizer around the world. What about a lack of phosphate? We lack nothing. Elaine Ingham: "When you run out of rocks, then you have to worry."

I must confess that I needed a long time to get used to the idea that soil itself is fertilization because it is mineral. I always thought... in silence, 'perhaps we should still get some manure.' Thinking and acting from a wrong point of view, during an entire life, cannot be just glossed over.

Although I still am very tempted to believe what a scientist is claiming... our own gardening practice has convinced me most. And then on top of that the findings of other people's practice also:
At 1st. a lab that finds no nutrients in a soil sample, in contrary of our findings in practice. And 2nd. someone (who has studied for this and knows the local situation), who (as if it speaks for itself) confirmes that our soil is mineral. 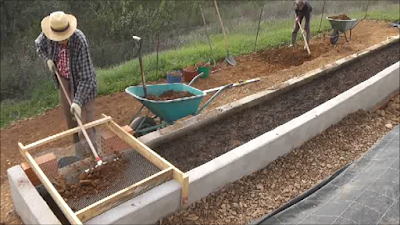 Imagine: The analise of a soil sample, elicits the analyst the remark: "You call this soil?". Which says that it contains very little or no nutrients, with which you can start something in horticulture... Thereafter we did not let us be discouraged, and mixed the soil with organic active substance (compost), with which we created a culture which yielded something very very decent. Subsequently it must be so, that after one or maybe two yields the soil must have been improved... so that nutrients can be measured...

If the soil is mineral... and it cannot be measured... what then, is the other thing in the soil? Nevertheless, mineral... simply the mineral that will not be measured. So... let no analise ever discourage you again!!