In the Netherlands we were accustomed to protect our garden from rain and cold. But here in Portugal certainly not. The weather always was beautiful. Some rain... a tender little rain and plenty of sunshine. A shade cloth over the vegetables would do. Until this happened... and it happened repeatedly.


The summer of 2014 was relatively wet also. But fortunately it was not like in April. So the use of a shade cloth was nearly enough. But we were warned and made plans. Could we build a greenhouse with wood? Or was it better to buy a (tunnel) greenhouse? And on which spot is should be built?
We liked the idea of a Chinese greenhouse also... But this we postponed (as a too big a project) to the future.

Most of the time it is our peculiarity to prefer doing everything ourselves. Then we can decide what the size of the greenhouse should be and what shape it should have. And, not least, whether it fits within our budget.

Meanwhile we were already well under way with our new raised bed, on the south slope, next to our house. It already had something like a surrounding wall and the soil was mixed with compost. 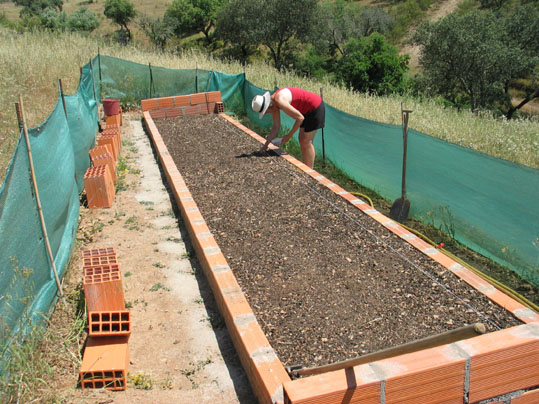 This summer we found a construction market that sold cheap 'FSC controlled' wood. This wood had to dry first, as it turned in all directions. But now, a few years later, it has adapted to our constructions :)

Slowly we started building our greenhouse. We had to do it in parts, because some plants could not yet do without the protection of the shade cloth.
The aim was to build a closed and an open greenhouse. Both needed a roof of plastic sheeting. First we built the closed greenhouse because we wanted to grow vegetables in the coming winter. 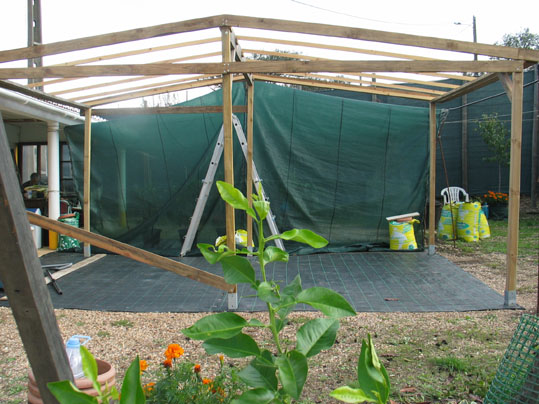 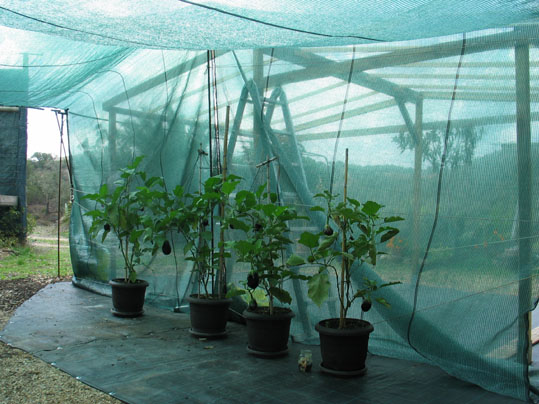 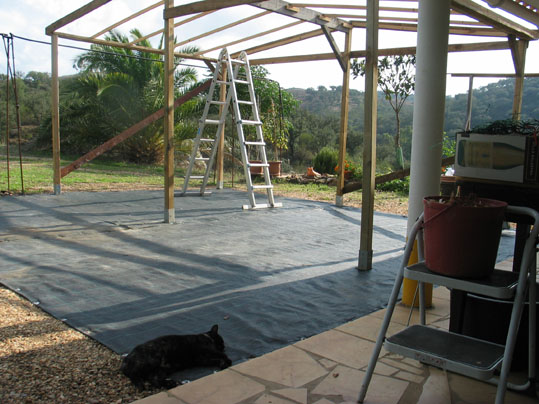 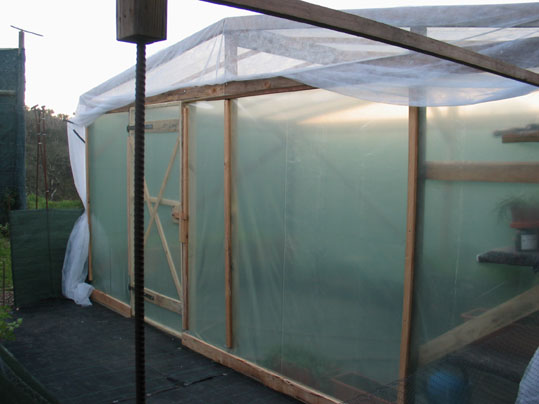 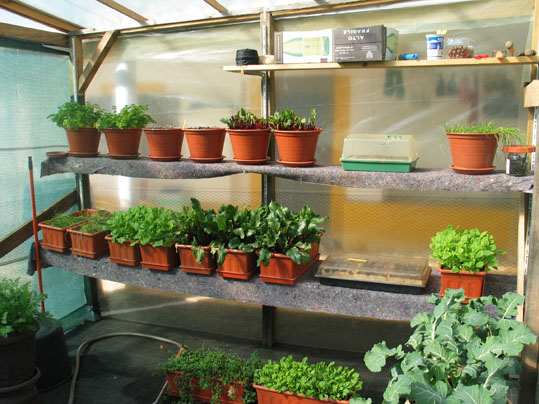 Meanwhile the raised bed, on the southern slope, was on its way to a big harvest, with onions, carrots and cabbage. What we cannot grow in the greenhouse, in pots, we grow in the raised bed. This way of doing has been good for us. 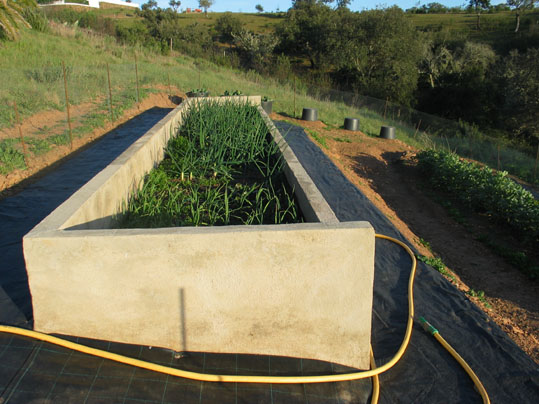 In May it was time to further build the open greenhouse. First we wanted to see, if this summer it could do without a plastic roof. So first we chucked a shade cloth over it. After all it was May already, so we expected no major downpours anymore. And so it went ... luckily. 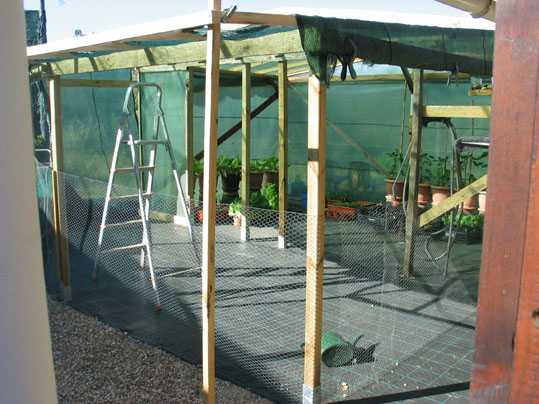 In October we took the shade cloth from the roof of the closed greenhouse, so that again there was sufficient light. Now we made a plastic roof over the open greenhouse, which helped us through the wet winter. And wet it was. A in between wall of plastic was not yet necessary. This only needed to be applied during the winter.
Occasionally there was frost. Against this, we have no defense. A genuine warm greenhouse this closed greenhouse will never be. 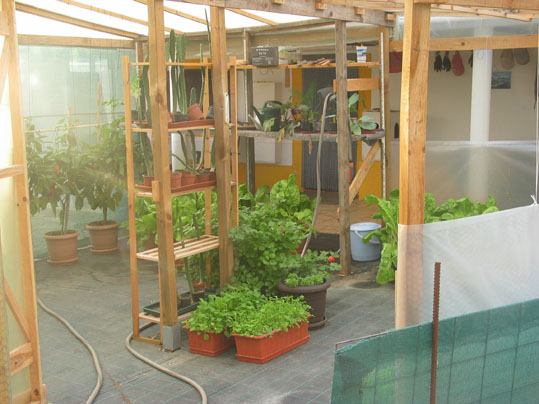 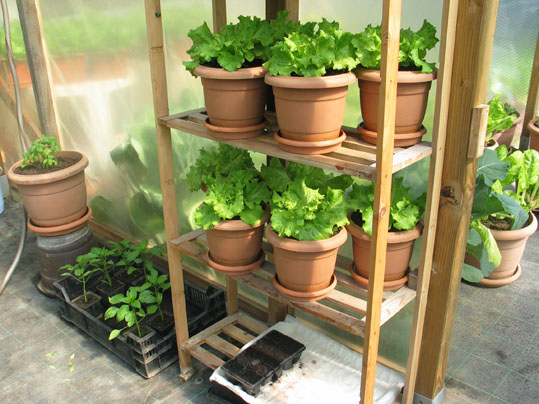 Again, the summer season is about to begin. The green shade cloth is already put on the roof, because the weather starts to warm up. When the sun gets hot in summer, we remove the plastic from the walls around the greenhouse also. Then the wind has free rein, through the shade cloth that covers the south and west side of the greenhouse. So then this closed greenhouse is in its summer mode again and turns into an open one. 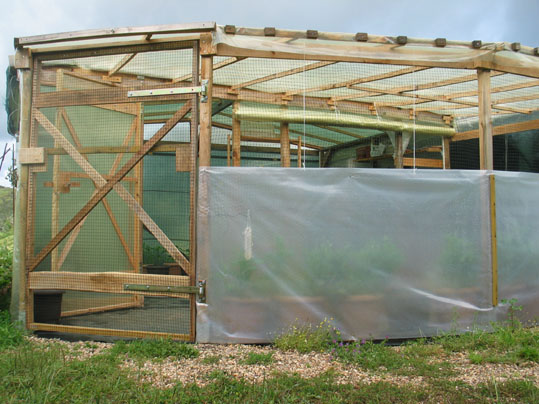 Meanwhile the swallows found their roof: