Why immerse materials before composting?

Why do we immerse hay with grafting fluid?

Hendrik: ''Sometimes I see people spray or sprinkle a pile of compost material with a garden hose or a watering can. This I have done also, but with grasses and hay that does not work. The water simply drips off. It ends up somewhere alongside and under a pile, where it disappears into the ground. What I want is to wet the material in such way, that the bacteria are able to get a grip on the hay. Good grip on both the waxy layer of the plant as well on the pile itself, with all its airy openings. That is why I came up with immersing the material in a barrel; thus immersing it in a protected environment.
By immersing and grafting hay in a barrel with bacteria in grafting fluid, and letting it stay there for at least 24 hours, it is in intensive contact with these bacteria. Because of the gravity of the stone I put there, ánd because of the water present, the air in the stems of the grasses are pressed out. And they are also crushed once more. The waxy layer, the wax coating on the grass is affected by the corrosive action of the grafting fluid. Cracks in the stems occur, the air is pressed out of the stem and the grafting fluid than can penetrate into the stem. And behold, the degradation of the hay into compost has begun. For me this was a discovery. A great experience and a first victory. For, a good start makes everything work what comes after.'' 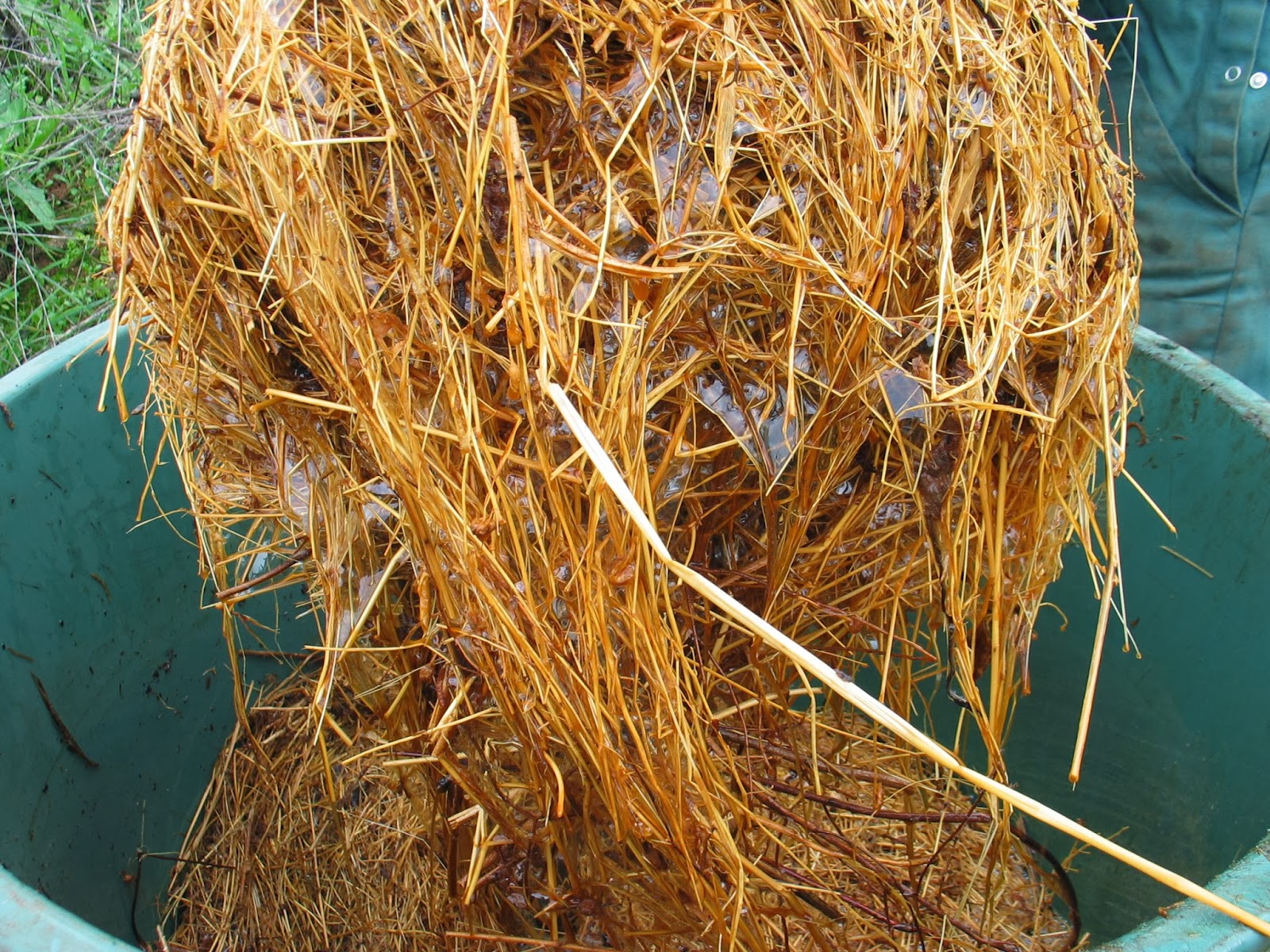 If hay is not whetted properly fungi take over. These fungi make the nitrogen present fixed. In fact, they confiscate the nitrogen, making it no longer directly available for bacterial degradation. Then the process of decomposition takes much longer than it is necessary. So it is crucial that the hay in the initial phase is being made soaked.

"Spontaneous combustion is a chemical process, not a bacterial process. It is a process which chemically goes on until ignition occurs. The aerobic thermophilic bacteria prepare for this ignition."

The overheating of hay is something else than the decomposition in a compost pile. To start this, there are other bacteria at work. So, it has to do with the moisture content at the start of the process. At a low level of moisture, the material overheats. At a high moisture level it will still heat, but not burn. It will only decompose correctly (not only reduce in volume) with a lot of moisture in the start. And this, not unimportant, with the right bacteria present.

So decomposition needs enough moisture. And in the initial phase, it also requires sufficient oxygen, to start an aerobic bacterial action. The temperature rises to 50 to 70 degrees Celsius. During the process, the compost pile runs out of oxygen and the process turns into a more an-aerobic bacterial action. The temperature drops.

In the beginning of this second stage, the content of organic matter in the compost is still almost fully intact. When the process here, at this point, is slowed down by pressing it down  (to reduce the content of oxygen), we can maintain its level of organic matter. This does not affect the further decomposition. Even more, it stimulates the process of preserving as much organic matter as possible. This is the basic principle of a successful composting of grasses.

The source of this knowledge lies in microbiology, bacteriology of the soil, specifically in the an-aerobic treatment of manure. Yes ... an-aerobic, the books say.

The German engineer docter H. Krantz has developed a method to process stable manure, with this principle, in what he calls: "Noble manure (...) in which all weed seeds are destroyed and all the nutrients are preserved."

In the Netherlands, in the years (approximately) 1938 to 1943, several articles and books where published by the agricultural specialists Dr.. Ir. Jan Smit and Dr.. Ir. F.C.Gerretsen.

The text in a publication by Dr. Ir. Jan Smit reads: "According to the method Krantz, (...) the manure is first stacked loose, so that a strong digestion of the carbon compounds takes place, under rise in temperature to about 60 degrees Celsius. Once that temperature is reached after 3 to 4 days, the mass is thoroughly kicked down and thus the conversions changes in an-aerobic. Then on this solid mass, a new amount of fresh manure is stacked. (...) By covering the sides the high temperature is saved as much as possible.''

This words made us think... Our way of working comes from this source. And the microbiologist Selman A. Waxman helped us further with his many publications.

Later, working with this process, we found out much more about the oxygen etc.: 'The method Krantz'.

On a picture in a book from dr. ir. Gerretsen we see three men standing on a big pile of composted manure, loading a horse wagon... In about the year 1935 : 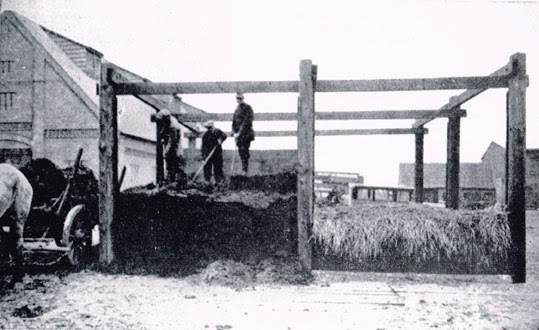