Compost Farming is a good idea.

Plants for crop for humans. That is the idea:

Once you know how to make good compost from grasses, a new world will open up for you. Grasses and herbs grow everywhere where there is a little rain. And even when they grow only a part of the year, this is sufficient to provide you with enough good grasses, and compost from that, for your vegetable patch.

This also gives you the possibility to create a garden, on rough ground, since the compost will ensure that the soil will be better. Thus, it may so happen that you take the raw material for your compost from better land and make your garden on bad ground... And so it happened to us. 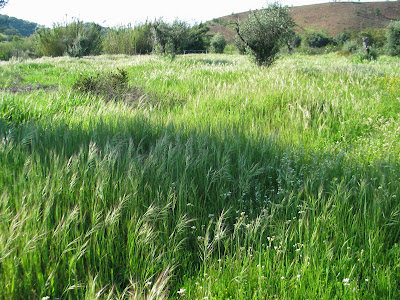 Caused by years of siltation, the soil down by the river now is good soil. Here our grasses and herbs grow. But we cannot make horticulture down here, because there is no water in the summer, when the river runs dry. And the plot is too far from the house, in order to keep a good overview. Many things can happen; animals can eat the crop. So we have chosen to build our garden close to the house. But here the primer layer is thin, rocky and full of large and small stones.

So we have scraped off the thin layer of soil, collected it, sieved and mixed it with grass compost. This provides a magnificent garden soil from which we can profit for years. It also gives us the opportunity to perpetrate organic horticulture. The land is pristine, healthy and fertile: Verginal 'Stone Dust, Star Dust.' After a few crops, the soil gets better rather than poorer. Meanwhile we eat only from our garden. We need not to buy any other vegetables.

So this can happen to anyone who sees and knows how to make compost from the grasses that grow around us. There are so many possibilities, at every scale and in any social structure. It can protect an entire community from poverty. And it can provide healthy food.

Imagine. Around you, you can find parcels of land, which are quite extensive, or hardly used. In spring everything is green and the land is full of flowers. When summer announces itself everything changes. That same grass stands golden in the fields. The autumn brings rain. The hay withers and turns from brown to black. Black hay returns to the earth, to the carbon chain, to serve as food for later grasses and herbs. This maybe happens when you do not interfere.

Occasionally there is a farmer, a shepherd who grazes his sheep. Or he has some cows for meat, a couple of goats, or some horses.
We made an agreement with the shepherd from the nearby village. His flock no longer grazes a part of our land for a season or two. We hay-make that parcel and the next seasons we change the plot.

The farmer and us, we both get what we want. The farmer gets well maintained land... For when you hay-make the land, you mow everything, while with grazing the land it is always partly grazed. Sheep eat what they like, step over the other food and move on. What is 'no good', they trample... On to the next piece of land...  But we get back land where some manure has fed the grasses.
With the hay that we harvest we make compost. With that compost we grow our vegetables. We do not sell the compost. But in general... one could sell the compost to others who use it to grow their vegetables.

This is a way to make our farm into a 'compost farm'. It is a good idea for an agrarian society. On any scale. Big or small. In the post 'Principles and some food for techies' you can read about some technical ideas.

Anyone who knows how to compost grasses and hay, can make a small, big or immense compost farm with this principle. With or without a farmer who is using the land, depending on what kind of agreement you can make.

Plants for crop for humans. That is the idea.